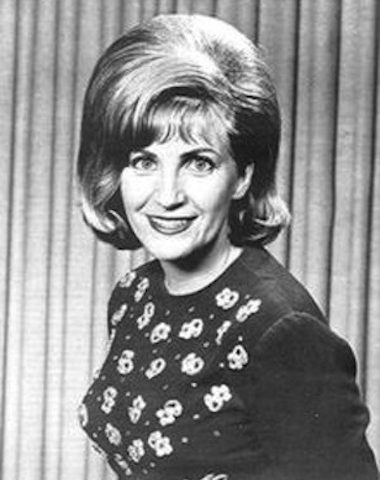 The prolific team of Gerry Goffin and Carole King wrote the song “I Can’t Stay Mad At You.” (They often worked closely with Neil Sedaka, which may be why the bridge of this song is similar to the bridge of Sedaka’s “Breaking Up Is Hard To Do.”) In 1963, the song went to #7 on the U.S. Billboard Hot 100, #2 on the Adult Contemporary chart, and #14 on the U.S. Country chart. It followed Skeeter’s success earlier that year with the song “The End of the World.”

Skeeter Davis began her career as half of the country-singing duo The Davis Sisters. They were the Mary Frances Penick, whose professional name was Skeeter Davis, and Betty Jack Davis. They were not related but were high school friends in Edgewood, Kentucky.  In 1956, a car accident killed Betty and badly injured Skeeter. The duo re-formed briefly with Georgia, Betty’s sister, but it was not the same. Producer Chet Atkins then mentored Skeeter in her solo career and encouraged her to double-track her own harmony to recreate the Davis Sisters’ sound.  Davis went on to have many country and pop hits.

Here are the lyrics to “I Can’t Stay Mad at You” by Skeeter Davis:

I can’t stay mad at you

I bounced right back into your arms

You got me where you want me