Take Good Care of My Baby by Bobby Vee

Sea of Love by Phil Phillips 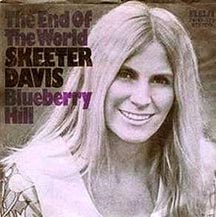 One heard all kinds of music on the radio during this first era of rock n roll. Even though doo wop was a signature sound, radio stations would play pop, R&B, country, and rockabilly. They weren’t so much into segmenting music into genres as they were concerned about the songs being a hit. “The End of the World” by Skeeter Davis is a country singer whose song crosses over into the Pop and R&B charts.

When the one you love doesn’t love you any more, it can seem like the end of the world Born Mary Frances Penick in Dry Ridge, Kentucky, Davis was a country singer who had her biggest success was with “The End of the World,” which was written by Arthur Kent and Sylvia Dee. Davis’ version was produced by Chet Atkins and has Floyd Cramer on piano. In 1963, the song peaked at #2 on the Billboard Hot 100, #2 on the Country singles, #1 on Easy Listening, and #4 on the Rhythm and Blues Chart. That’s quite an accomplishment. Her version has been used in films and on TV (including Girl, Interrupted; Riding in Cars with Boys; Daltry Calhoun; An American Affair; and an episode of Mad Men).

Skeeter Davis began her career as half of the country-singing duo The Davis Sisters. They were Skeeter Davis (the professional name of Mary France Penick) and Betty Jack Davis. They were not related but were high school friends in Edgewood, Kentucky. In 1956, a car accident killed Betty and badly injured Skeeter. The duo re-formed briefly with Georgia, Betty’s sister, but it was not the same. Producer Chet Atkins then mentored Skeeter in her solo career and encouraged her to double-track her own harmony to recreate the Davis Sisters’ sound. Davis went on to have many country and pop hits.

Here are the lyrics to “The End of the World” by Skeeter Davis:

For another song by Skeeter Davis: “I Can’t Stay Mad at You.”

Please click here for the Daily Doo Wop YouTube channel, to which you can subscribe. Thank you for stopping by The Daily Doo Wop. Hope you enjoyed “The End of the World” by Skeeter Davis.