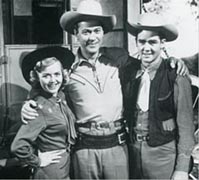 So it begins: “From out of the clear blue of the western sky, comes…”the Western TV series Sky King. The show was a huge success, airing on different stations on different days from 1951 to 1962. Schuyler “Sky” King (Kirby Grant) fought evildoers from his twin-engine Cessna rather than a horse. He had been a World War II aviator and was now running the Flying Crown Ranch assisted by his niece Penny(Gloria Winters) and nephew Clipper (Ron Hagerthy).

Kirby Grant (that is, Sky King) was born Kirby Grant Hoon, Jr., in Butte in Silver Bow County, Montana, in 1911. He was a child prodigy on the violin and became a professional singer and bandleader. He has a long list of film credits in musicals, comedies, and Westerns. He played the title role in a number of Corporal Rod Webb movies. Once Sky King ended, Grant traveled with the Carson and Barnes Circus. He then became a Public Relations director for Sea World in Florida. Grant and his wife founded the Sky King Youth Ranches of America, which helped orphaned and abandoned children. Grant died in a car accident in 1985 at the age of 73. He was going to watch a launch of the Space Shuttle Challenger at Cape Canaveral, where they were about to honor Grant’s achievements.

Gloria Winters was born Gloria Carolyn Hirst in 1931 in Los Angeles and worked as a child actress, with some small roles in films. They were mostly Westerns, and she appeared in the TV shows The Lone Ranger and The Range Rider as well. For the 1949 to 1950 season of the TV series The Life of Riley, Winters played the daughter Babs. At the time, Jackie Gleason played Riley before the show was recast with William Bendix as the lead. Winters was in Where’s Raymond? (renamed The Ray Bolger Show). Her most famous role was as Penny, the niece to Kirby Grant’s Schuyler “Sky” King. Winters was in 72 episodes of Sky King, from 1952 to 1959. She also appeared in a number of 1950s TV series, including Richard Diamond, Private Detective; Racket Squad; and Death Valley Days. She married Dean Stevens Vernon, who was a sound engineer on Sky King, and retired from acting after Sky King ended, although she appeared in The Life and Legend of Wyatt Earp in 1960. She also wrote a book on etiquette titled Penny’s Guide to Teenage Charm and Personality. Winters received a Golden Boot Award in 2002 for her work in Western films and television. She died in 2010.

Ron Hagerthy was born in 1932 in Andover, South Dakota,as Ronald Hagerthy. He is an actor, with roles in film and television: The Horse Soldiers, Sky King (19 episodes), I Was a Communist for the FBI, Lassie, The Rifleman, The Untouchables, Gunsmoke, Tales of Wells Fargo, The Life and Legend of Wyatt Earp, Navy Log, The Silent Service, Have Gun — Will Travel, Annie Oakley, Gunslinger, and many more.