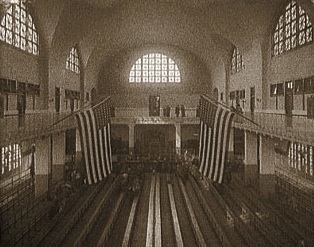 The Federal government closed down all 33 structures on Ellis Island. Between 1892 and 1954, Ellis Island was the most active immigrant inspection station in the United States, with more than 12 million people passing through. (About 40% of Americans today can point to at least one ancestor who came through Ellis Island.) The station had been in decline since the 1920s because of policies that limited immigration and imposed quotas from different countries (i.e., the Immigration Quota Act and the National Origins Act).

Doo-Wop music and its beautiful vocal harmonies has its origins in several places. One large part is from the African-American community and R&B. Another area is American barber shop-style singing. A third part comes from the immigrant groups in urban areas, who adopted the musical style. Sometimes when the descendants of Italian immigrants sang Doo-Wop, they stressed the nonsense syllable “wop” with defiance. One example is from the song “I Wonder Why” by Dion & the Belmonts. WOP was a racial slur, usually used against Italian-Americans. Some say the term stood for WithOut Papers, a condition of some Italians coming through Ellis Island (some say it comes from guappo, Italian for swagger).

Vladimir Yefimovich Semichastny became chairman of the U.S.S.R’s KGB, a post he held until April 1967. Semichastny rose up through the ranks starting with the Ukranian Communist Youth League (Komsomol). Semichastny held a hard line in opposing the West and Western culture and was instrumental in the plot to oust Nikita Khruschev in 1964. (They felt Nikita had become too soft on America.)

The Cold War fostered great interest in Russia, spies, and intelligence/security organizations. Even children knew about Mr. Big and Boris and Natasha from The Rocky & Bullwinkle Show; they wanted to kill moose and squirrel. For a blog post of the comic “Spy vs. Spy,” please click here.

The TV show Rocky & His Friends aired for the first time. The animated series featured denizens of Frostbite Falls, including Rocket J. Squirrel, a smart flying squirrel, and Bullwinkle, a many-talented but bumbling moose, who fought against Russian spies Boris Badenov and Natahsa Fatale. The show first appeared on ABC on Tuesday and Thursday afternoons following American Bandstand and was sponsored by General Mills. The puns, the topical satire, and the good-natured humor helped to make it a show for children and adults. The variety-show structure of the program featured Mr. Peabody and his boy Sherman, who traveled through time in the way-back machine; Fractured Fairy Tales an Aesop’s Fables, which had a new take on old stories; and Dudley-Do-Right, a Canadian Mountie who fought the villainous Snidely Whiplash. Also, Bullwinkle, aka Mr. Know-It-All, had his own corner for magic tricks and poetry.

Please click here for a peek into “Bullwinkle’s Corner” and a recitation of William Wordsworthy’s poem “Daffodils.”