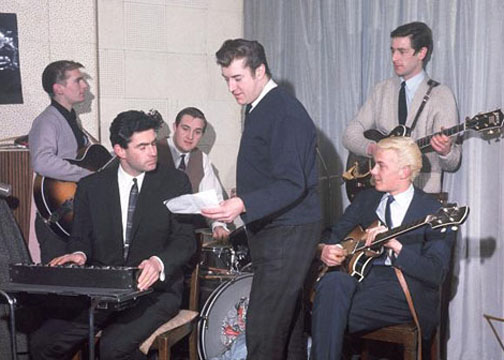 The composition “Telstar” is a piece of instrumental music that honors the first Telstar communications satellite that was launched on July 10, 1962. Telstar was operated by NASA as part of a multi-national agreement among AT&T, Bell Telephone Laboratories, GPO (UK), and the National PTT (France). The purpose was to relay telecommunications across the Atlantic Ocean, including television images and phone calls.

“Telstar” was written and produced by record producer Joe Meek. The song was an international hit and reached #1 on the Billboard Hot 100 and U.K. Singles Charts in 1962. The weird sound effects give the feeling of being in outer space.

The Tornados were a British instrumental group that included Clem Cattini, Alan Caddy, Roger LaVern, George Bellamy, Heinz Burt, and Geoff Goddard (who played the clavioline, an electronic keyboard instrument). They backed up a number of Joe Meek’s band as well as the singer Billy Fury. They also had hits with “Robot” and “Globetrotter.” However, by the time The Beatles, The Rolling Stones, and other English bands that had vocals and harmony as well as instruments became popular, The Tornados had less success. Members splintered off into solo careers and in joining other groups.

The Daily Doo Wop Rec Room has daily featured doo wop, rock and roll, R&B, or rockabilly songs that were hits during the first era of rock and roll (that is, from about 1952 until the British invasion in 1964). After a song is featured, it then goes into the juke box. You are welcome to listen to any of the 40+ selections there. Every weekend, there is a Golden Oldis Juke Box Saturday Night, and the juke box is full of song requests from the 1950s and 1960s.

Please click here for the Daily Doo Wop YouTube channel, to which you can subscribe. Thank you for stopping by The Daily Doo Wop. Hope you enjoyed “Telstar” by The Tornados.