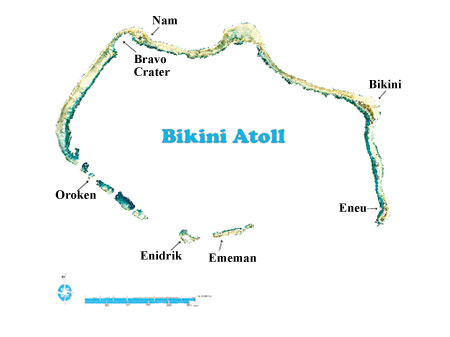 Bikini Atoll, Nuclear Weapons Testing, and The Bikini. What do these three things have in common?

Well, firstly, Bikini Atoll is part of the Republic of the Marshall Islands in the Pacific Ocean. (Atolls are ring-shaped coral reefs that encircle a lagoon.) Secondly, this little tropical area underwent more than 20 nuclear weapons tests from 1946 through 1958 and is a symbol for the “nuclear age.” Thirdly, Louis Réard, who was actually a French car engineer, was running his mother’s lingerie boutique in Paris in 1946 and invented the two-piece swimsuit that exposed the navel . He named it after the Bikini Atoll atom bomb test. He believed his bathing suit would cause an explosion of excitement. Ah, that’s so French. However, it took until the 1950s and 1960s to become popular in the United States.