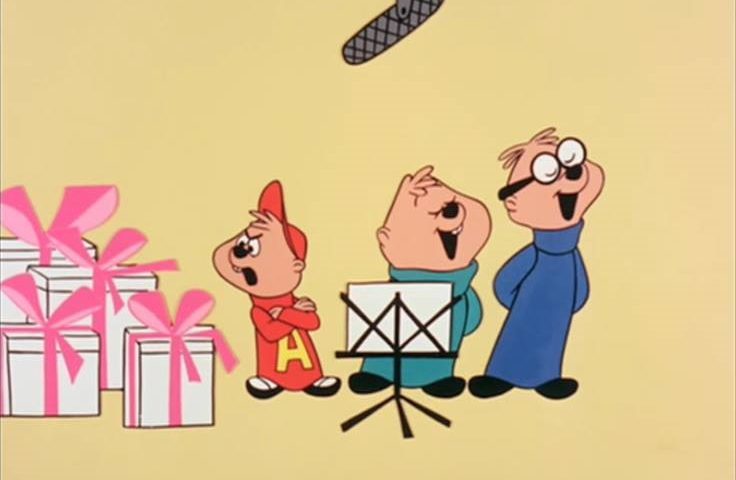 Oh “ALVIN!!!” This novelty Christmas song was written, performed, and produced by Ross Bagdasarian, Sr., who was also known as David Seville. The credit goes to The Chipmunks, Alvin, Theodore, and Simon. (It was, of course, Bagdasarian singing. He sped up the playback to create the funny chipmunk sounds.)

“The Chipmunk Song (Christmas Don’t Be Late)” has had phenomenal commercial success. In 1958 it went to #1 on the U.S. Billboard Hot 100. It also charted on the Billboard Hot 100 several more times — that is, in 1959, 1960, and 1962. The single sold 4.5 million copies in seven weeks (although it received the lowest-possible rating on  American Bandstand’s “Rate-A-Record” segment). “The Chipmunk Song” is the last Christmas/Holiday song to reach #1 on any U.S. singles record chart. Anyway, it won three Grammy Awards in 1958, which were for Best Comedy Performance, Best Children’s Recording, and Best Engineered Record (non-classical).

Bagdasarian was a pianist, composer, actor, author, and a prolific songwriter. Some of his songs include “Come On-a My House.” “Witch Doctor,” “Safari,” and “Armen’s Theme.” He took the name David Seville because during WWII he was stationed in Seville, Spain, and liked it there.

Here are the lyrics to: “The Chipmunk Song (Christmas Don’t Be Late)” by David Seville and The Chipmunks:

Cover for the Single of “The Chipmunk Song”

For another song by this ensemble: “Witch Doctor.”