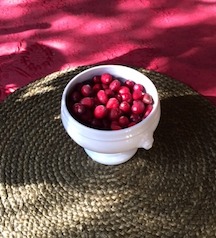 Concerns about toxins in the environment and our food are not new and occurred in the 1950s. Arthur S. Fleming, the Secretary of Health, Education and Welfare, announced on November 9, 1959, just days before Thanksgiving in 1959 that the weed killer aminotriazole had contaminated cranberries from Oregon and Washington and ordered the berries pulled from grocery-store shelves. Aminotriazole in large doses when fed to rats could induce thyroid cancer, and the FDA declared aminotriazole carcinogenic. The human equivalent of the diet fed to the rats would have meant eating 15,000 pounds of cranberries every day for a lifetime. However, to be on the safe side, Fleming did not ban outright the cranberries, but he recommended that no one eat cranberries if they did not know where they had been grown. Fleming felt that he had “no right to sit on information of this kind.”

The public went crazy debating the merits of the study and the wisdom of Fleming’s decision. Some were fearful and others were angry, thinking that Fleming had over reacted. Of course, the situation became a political issue, especially since America was heading towards a Presidential election in 1960. The Secretary of Agriculture Ezra Benson announced that he would eat cranberries with his turkey for Thanksgiving. Presidential candidates Richard M. Nixon and John F. Kennedy capitalized on the situation. Nixon had four helpings of cranberry sauce and Kennedy, who came from a cranberry-producing state, drank two glasses of cranberry juice.

The upshot was that cranberry sales did, indeed, go down that year. Most people purchased cranberry products primarily during Thanksgiving and Christmas. Even though he U.S. Food and Drug Administration determined in January of 1960 that 99% of the cranberries had not been contaminated, it was too late to save the season. However, the cranberry growers stopped using aminotriazole. Also, the American public took a liking to cranberry juice, and over the years, the products have been consumed all year long.

Fleming remained in his position until the end of President Eisenhower’s administration in January, 1961. He later became Chairman of the Commission on Civil Rights. He was also President of the University of Oregon.