The Flying Saucer by Buchanan and Goodman

The Flying Saucer by Buchanan and Goodman 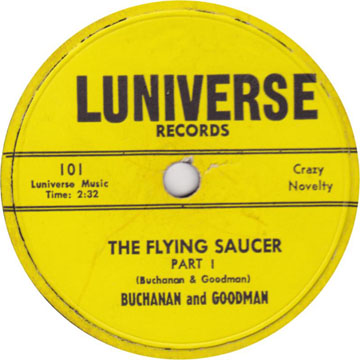 The novelty song for this Friday is “The Flying Saucer Pts. 1 and 2”  by Bill Buchanan and Dickie Goodman went to #3 on the U.S. Billboard Best Sellers in Stores chart in 1956. It’s a mashup of popular songs and news commentary that tell about a visit from a flying saucer. Buchanan is the radio announcer who tells us that spacemen are attacking the earth. Goodman is John Cameron-Cameron (having fun with the name of broadcaster John Cameron Swayze). 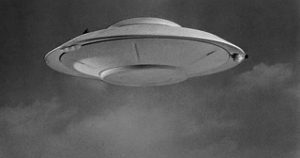 Here are the song references: “Open Up that Door” by Nappy Brown, “The Great Pretender” by The Platters, “I Want You to be My Girl by Frankie Lymon and the Teenagers, “Long Tall Sally” by Little Richard, “Poor Me” by Fats Domino, “Heartbreak Hotel” by Elvis Presley,” “Earth Angel” by The Penguins, “I Heart You Knocking” by Smiley Lewis, “Tutti Frutti” by Little Richard, “(You’ve Got) The Magic Touch” by The Platters, “Band of Gold” by Don Cherry, “Ain’t That a Shame” by Fats Domino, “Don’t be Angry” by Nappy Brown, “Blue Suede Shoes” by Carl Perkins,” Maybellene” by Chuck Berry, “See You Later Alligator” by Bill Haley & His Comets, and “My Prayer” by The Platters. Whew. There is also a message in Part 2 that is a backward secret message: “Caution, secretary of Defense.”

The song spurred covers and variations. There were versions by Sid Noel and his Outer Spacemen; Alan Freed, Al “Jazzbo” Collins and Steve Allen; and Geddins & Sons. Dewey, George & Jack and The Belltones had a variation of the song. There was an answer record made titled “The Answer to the Flying Saucer U.F. O (Men from Mars)” by Syd Lawrence and Friends.

Please click here for the Daily Doo Wop YouTube channel, to which you can subscribe. Thank you for stopping by The Daily Doo Wop. Hope you enjoyed “The Flying Saucer Pts 1 and 2” by Buchanan and Goodman