The Great Imposter by The Fleetwoods

The Great Imposter by The Fleetwoods 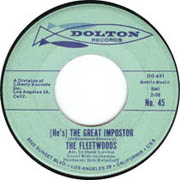 The song “The Great Imposter” is one of the great golden oldies songs from this first era of rock and roll. This sad love song was written in 1960 by Jackie DeShannon and Sharon Sheeley. DeShannon has had quite a career, both as a writer (“Put a Little Love in Your Heart”, “Bette Davis Eyes”) and singer (“What The World Needs Now”). During Sheeley’s career, she wrote for a number of artists, including Ricky Nelson, Glen Campbell, Brenda Lee, and Eddie Cochran, who was her fiancé. The Fleetwoods recorded”(He’s) The Great Imposter” in 1961 by The Fleetwoods, and it reached #30 on the Billboard Hot 100. One of the musicians on this record was session drummer Earl Palmer, best known as Little Richard’s and Fats Domino’s drummer. The song begins in the key of F Major, but meanders to a very sad D Minor when the lyrics become tragic. The back-and-forth progression of D-Minor to A-Minor chords creates a classic lament in the Italian style

“Well, I went and lost her
To the great imposter
I stood and watched her fall
Couldn’t help her at all

Poetry, so sweet, has her at his feet
She thinks she’s the one but he has just begun
All her friends they just watch her
For they know the great imposter

Don’t she know he’s on a stage
It’s not real, it’s just a play
And he’s playing a part
That is soon to break her heart

Oh, can’t she see tomorrow’s misery?
Soon she’ll learn her fate but it will be too late
All her friends they just watch her
For they know the great imposter

Poetry, so sweet, has her at his feet
She thinks she’s the one but he has just begun
All her friends they just watch her
For they know the great imposter

For more songs by The Fleetwoods: “Mr. Blue” and “Come Softly to Me.”

If you are interested in a compilation of their recordings, please consider this from amazon: Come Softly To Me – All Their Biggest Hits & Four Complete Albums 1959-61 [ORIGINAL RECORDINGS REMASTERED] 2CD SET

The Fleetwoods, known for their beautiful harmonies and vocals, were high school friends from Olympia, Washington. Group members included Gretchen Christopher, Gary Troxel, and Barbara Ellis. They had called themselves Two Girls and a Guy, but Bob Reisdorff, the owner of Dolphin Records, recommended that to be more commercial, they could be The Fleetwoods, because the three singers were from Olympia and had the same telephone exchange — that is, Fleetwood

The Daily Doo Wop Rec Room has daily featured doo wop, rock and roll, R&B, or rockabilly songs that were hits during the first era of rock and roll (that is, from about 1952 until the British invasion in 1964). After a song is featured, it then goes into the juke box. You are welcome to listen to any of the 40+ selections there. Every weekend, there is a Golden Oldies Juke Box Saturday Night, and the juke box is full of song requests from the 1950s and 1960s