The Lettermen The Way You Look Tonight

Heat Wave by Martha and the Vandellas

The Lettermen The Way You Look Tonight 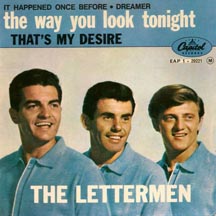 The Lettermen were unknown until they signed with Capitol Records in 1961. Group members at the time were Tony Butala, Jim Pike, and Bob Engemann. They have beautiful, tight vocal harmonies and have enjoyed great success over the years. There have been numerous personnel changes over the years. However, Tony Butala has been with The Lettermen since 1958 and is the only original member of the trio performing with the group today.

Here are the lyrics to “The Way You Look Tonight” by The Lettermen:

“Some day, when I’m awfully low
And the world is cold
I will feel a glow just thinking of you
And the way you look tonight

You’re lovely, with your smile so warm
And your cheeks so soft
There is nothing for me but to love you
Just the way you look tonight

For a fine doo wop version of the song, please listen to The Jaguars. They were an inter-racial group from Los Angeles and recorded “The Way You Look Tonight” in 1956. They were Herman Chaney, Charles Middleton, Valerio “Val” Poliuto, and Manuel “Manny” Chavez.

Please click here for the Daily Doo Wop YouTube channel, to which you can subscribe. Thank you for stopping by The Daily Doo Wop. Hope you enjoyed “The Way You Look Tonight” by The Lettermen.