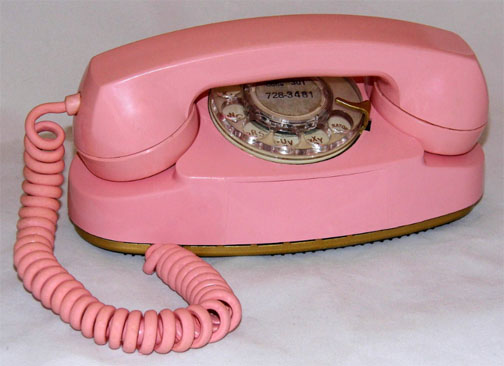 Today’s folks live by their mobile phones and devices for connectivity to the world — friends, family, the worldwide web, music, and entertainment. In the doo-wop era, though, it was exciting to have the newly designed Princess Phone. (Yes, it was mostly for phone calls. But, wait, there was another use; it also lit up.)

AT&T introduced the Princess Phone in 1959. It was “for her.” That is, it was with the woman of the house in mind, and it became popular with teenagers as well. The Princess Phone was designed to be:

The advertisements purported that there would be no more phones in a hallway. The Princess Phone could be in a bedroom and fit in with the décor. The Princess Phone came in many colors, including white, beige, pink, blue, turquoise, green, yellow, ivory, peach, gray, red, clear, and black.

And there was an illuminated dial when you lifted the handset – or you could keep the phone lit all the time and use it as a nightlight.

A touchtone version became available in 1964.

The original designer of the Princess Phone was Henry Dreyfuss. He was known for industrial designs that incorporated common sense was influential in the movements that considered human factors for appliances, other products, and transportation. Dreyfuss and his associates were active particularly from the 1930s through the 1970s, involved in designs for Hoover vacuums, Big Ben Westclox alarm clocks, Royal Typewriters, Polaroid cameras, and John Deere tractors as well as railroads and steamships.