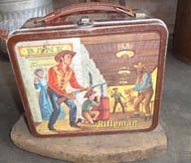 This doo wop era is considered to be the golden age of television — and the golden age of TV Westerns. The series classic TV show The Rifleman aired from 1958 to 1963. The stories revolved around rancher and widower Lucas McCain, played by Chuck Connors, a Union Civil War veteran, who was trying to raise his son Mark, played by Johnny Crawford – and help the town Sheriff keep law and order — in North Fork, New Mexico Territory. The action took place around the 1870s and 1880s.

The pilot episode for the series, which was titled “The Sharpshooter,” first appeared on Dick Powell’s Zane Grey Theatre in March of 1958 and this was the first episode of the series when it began.

The Rifleman was one of the first prime-time show that delved into the difficulties of a widower raising a child. The life lessons Mark learned were sometimes realistic and not always sweet. Lucas McCain believed that people needed second chances, and that included the Marshal Micah Torrance, played by Paul Fix, who was a recovering alcoholic.

Westerns were very popular at the time, and there was interest in the type of weapon the hero would use. Lucas McCain used a modified Winchester Model 1892 with a large ring lever drilled and tapped for a set screw. The lever design allowed him to cock the rifle by spinning it around his hand.

Arnold Laven and Sam Peckinpah created the series. Peckinpah also wrote some of the episodes, based on his childhood on a ranch. Herschel Burke Gilbert, the prolific composer, orchestrator, and music supervisor for films and television, wrote the theme to The Rifleman.

This is Season 1, Episode 38 titled “Outlaw’s Inheritance.” It first aired on June 16, 1959. The town becomes wary when Lucas McCain is a beneficiary in an outlaw’s will. Running time: 24:39.

If you would like a copy of the DVD, it is available at Amazon: The Rifleman Official Season 1 (Episodes 1 – 40)

The Daily Doo Wop Rec Room has a TV with four selections, which are updated twice a week. There are usually a series episode, a game show, a cartoon, and a vintage commercial.