The Velvets Tonight (Could Be the Night) 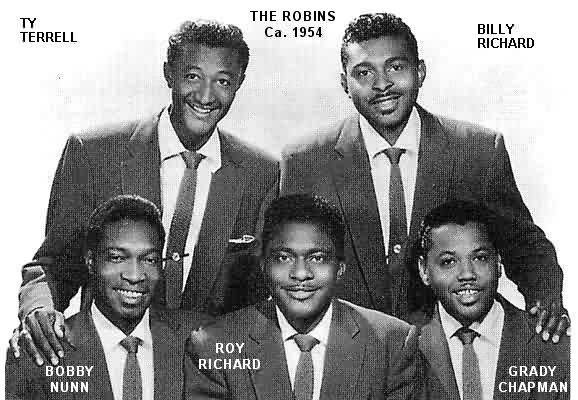 This is one of the doo wop era’s story songs. It’s July 2, 1953, and a prisoner serving time for armed robbery wakes up to a riot among the inmates. It spreads from cell block to cell block, with threats, dynamite, and tear gas. It all ends on July 4, with no Independence Day for the prisoners. “Riot in Cell Block #9,” which was written by famous team of Jerry Leiber and Mike Stoller and sung by The Robins. It is a classic recording from 1954 and went to #1 on the R&B Chart. Numerous artists have covered the song, including versions by The Grateful Dead, The Beach Boys, Johnny Winter, Dr. Feelgood, The Blues Brothers, Johnny Cash, and, not surprisingly, The Coasters.

The Robins, who were from Los Angeles, influenced musicians in many genres, including R&B and doo-wop. In the initial group were Ty Terrell, Billy Richards, Roy Richards, and Bobby Nunn. Carl Gardner and Grady Chapman joined them in 1954. Then, in 1956, Garner and Nunn left to go to New York and helped to form The Coasters. There were a number of “bird groups” at the time besides The Robins, including The Orioles, The Ravens, The Crows, The Flamingos, The Wrens, The Falcons, and The Penguins.

Here are the lyrics to “Riot in Cell Block #9” by The Robins.

On July the second, 1953
I was servin’ time for armed robbery
At four o’clock in the mornin’, I was sleepin’ in my cell
I heard the whistle blow then I heard somebody yell

The trouble started down in cellblock number four
And spread like fire across the prison floor
I said, “okay boys, get ready to run
Here come the warden with a tommy gun”

The warden said, “come out with your hands up in the air
If you don’t stop this riot, you’re all gonna get the chair”
Scarface Jones…

The warden said, “come out with your hands up in the air
If you don’t stop this riot, you’re all gonna get the chair”
Scarface Jones said, “it’s too late to quit
Pass the dynamite ’cause the fuse is lit”

For another song by The Robins: “Smokey Joe’s Café.”

Please click here for the Daily Doo Wop YouTube channel, to which you can subscribe. Thank you for stopping by The Daily Doo Wop. Hope you enjoyed “Riot in Cell Block No 9” by The Robins.