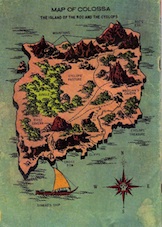 From the land beyond beyond…
from the world past hope and fear…
I bid you Genie, now appear.

Doo-wopper Terry (one of the authors of The Daily Doo-Wop) bought the comic book for The 7th Voyage of Sinbad, which came out in December, 1958, right before the film’s release, and couldn’t wait for the movie to open. If you lived in a big city, you could see the film starting on December 23. Terry, who lived in the suburbs in Illinois, didn’t get to see it until the Spring. That’s how it was. But when the film did arrive, he stayed all day at the movie theater and saw it over and over and over again.

Sinbad the Sailor (Kerwin Matthews) encounters an evil magician (Torin Thatcher), a giant Cyclops, a two-headed bird, and other dangers. In the end, through his own cunning and prowess plus the help of a boy genie (Richard Eyer), Sinbad overcomes evil and saves the beautiful princess Parisa (Kathryn Grant). Sinbad wins her love, too, and tells her: “For another such kiss, I’d invent a whole continent.”

This fantasy film, from Columbia Pictures, is beautiful to watch — full of brilliant blues and oranges. Ray Harryhausen, the visual effects creator, worked for 11 months on the animation. He invented a special technique of stop-motion model animation called Dynamation for the film. Harryhausen especially liked the maid/cobra dancing sequence, which he modeled after belly dancers he’d seen in Beirut. My favorite animated scene is when Sinbad battles the skeletons. Please click here for a clip of that scene.

Fans and critics love the film (and it has a 100% rating from critics on Rotten Tomatoes). Enjoy!