The Stroll by The Diamonds

The Clovers Devil or Angel

The Chimes Once in a While

The Stroll by The Diamonds 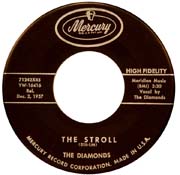 Part of the fun of this first era of rock n roll involves how songs and dances went to together. In 1957 “The Stroll” was being danced in America’s major cities and became one of the favorite 1950s dances. The R&B singer/songwriter Chuck Willis performed the stroll to his hit song “C.C. Rider” on American Bandstand. Dick Clark noted that there was no specific song for the dance. Clark suggested to writers Clyde Otis and Nancy Lee that they write one. They did, and The Diamonds, a Canadian vocal group, recorded and released the “The Stroll” early in 1958. It went to #4 on the Billboard Pop Chart.

The Diamonds formed in Toronto, Canada, in the early 1950s. They had one of their biggest charting singles with “Little Darlin’,” which peaked at #2 and stayed there for 8 weeks on the U.S. Pop chart in 1957. The original members were Dave Somerville, Ted Kowalski, Phil Levitt, and Bill Reed. The group had many TV appearances, including the shows of Arthur Godfrey, Steve Allen, Perry Como, Vic Damone, Tony Bennett, Eddy Arnold, and Paul Winchell, as well as American Bandstand. The Diamonds were instrumental in bringing doo wop and rock n roll to a mainstream audience. If you would like to read about The Diamonds’ hit “Little Darlin'” and its beginnings, please click here.

Here are the lyrics to “The Stroll” by The Diamonds:

The Daily Doo Wop Rec Room has daily featured doo wop, rock n roll, R&B, or rockabilly songs that were hits during the first era of rock n roll (that is, from about 1952 until the British invasion in 1964). After a song is featured, it then goes into the juke box. You are welcome to listen to any of the 40+ selections there. Every weekend, there is a Golden Oldies Juke Box Saturday Night, and the juke box is full of song requests from the 1950s and 1960s.

Please click here for our Youtube channel, to which you can subscribe. Thank you for stopping by The Daily Doo Wop. Hope you enjoyed “The Stroll” by The Diamonds.