The Falcons You’re So Fine 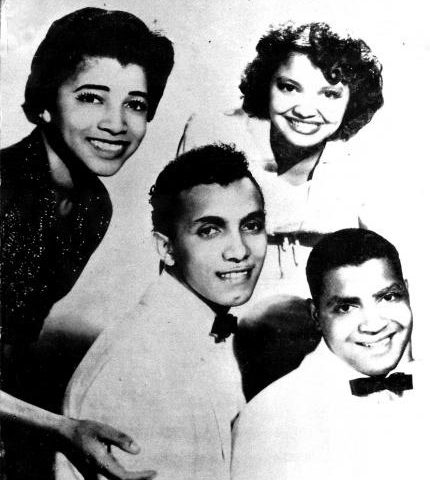 Some of the doo wop music groups come out of the rhythm and blues and jazz world. Such is the case with The Tune Weavers, who came to national attention with their song “Happy, Happy Birthday Baby” in 1957.  It has been a golden oldies music and juke box favorite ever since.

The song “Happy, Happy Birthday Baby” was written by group members Margo Sylvia and Gilbert Lopez. Margo’s boyfriend had just broken up with her, and she wrote it from her heartache because she didn’t want it to be so. (Her boyfriend had been Donald Clements of the group The Sophomores.) There is a wonderful melancholy feeling to the song as the singer reflects on the loss on what should be a happy occasion (that is, a birthday). In 1957, the song went to #1 on the R&B Chart and #5 on the Billboard Pop Chart. The B-Side was a version of “Ol’ Man River.”

The Tune Weavers, who were originally called The Tone Weavers, formed in Woburn, Massachussetts around 1956. They consisted of brother and sister Margo Sylvia, who was born Margo Lopez, and her brother Gilbert “Gil’ Lopez. Other members were Margo’s husband John Sylvia and her cousin Charlotte Davis. Margo and Gil had sung together as a jazz and pop duo previously. The group was promoted by Dick Clark as well as Chess Records in Chicago who picked up the song from Casa Grande records. The Tune Weavers’ song “Happy, Happy Birthday Baby” came out on Checker Records, which was a subsidiary of Chess. They toured with many other groups of the time, including The Everly Brothers, Eddie Cochran, The Clovers, Paul Anka, and Buddy Holly and the Crickets.

“Happy Happy Birthday Baby, although you’re with somebody new
Thought I’d drop a line to say that I wish this happy day
would find me beside you.

Happy Happy Birthday Baby, no I can’t call you my baby
Seems like years ago we met on a day I can’t forget
cause that’s when we fell in love.

Do you remember the names we had for each other
I was your pretty, you were my baby
how could we say goodbye.

Hope I didn’t spoil your birthday, I’m not acting like a lady
So I’ll close this note to you with good luck and wishes too
Happy Happy Birthday Baby.”

Please click here for the Daily Doo Wop YouTube channel, to which you can subscribe. Thank you for stopping by The Daily Doo Wop. Hope you enjoyed “Happy Happy Birthday Baby” by The Tune Weavers,