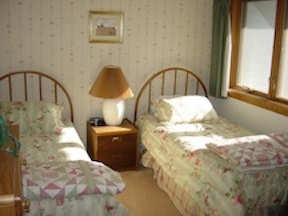 So what was behind all this about the mid-century media showing married couples sleeping in twin beds? Television in the 1950s and early 1960s was designed to cater to families. After all, households were happy to have one television set, and could not afford multiple sets to suit the tastes of the different family members. People tended to watch as a family, so shows and commercials were created with this in mind. Television shows during this time period tended to show married couples sleeping in twin beds, often with a night table in-between. The networks and sponsors wanted to avoid connotations of a physical relationship and make shows family friendly. This was true of situation comedies from I Love Lucy, which aired from 1951 to 1957, to The Dick Van Dyke Show, which aired from 1961 o 1966.

Part of the reason for married couples sleeping in twin beds goes back to the Hays Code. This was a series of rules and regulations that began in the 1930s for Hollywood film directors and producers. For example, the Hays Code said that if a man and a woman were in the same bed, one of them had to keep a leg on the floor. So, a man could sit on the side of a bed and talk to a woman in the bed, but one of his legs had to maintain contact with the floor at all times. Times changed, and the Code became impossible to enforce. The Code ended in 1968 in favor of the rating system.

In real life, of course, plenty of couples shared a bed.

For Classic TV episodes from this doo-wop era in what is considered to be The Golden Age of Television, please click on the TV in our Rec Room. Selections are updated twice a week, with a show, a cartoon, and a commercial.