Brook Benton Walk on the Wild Side 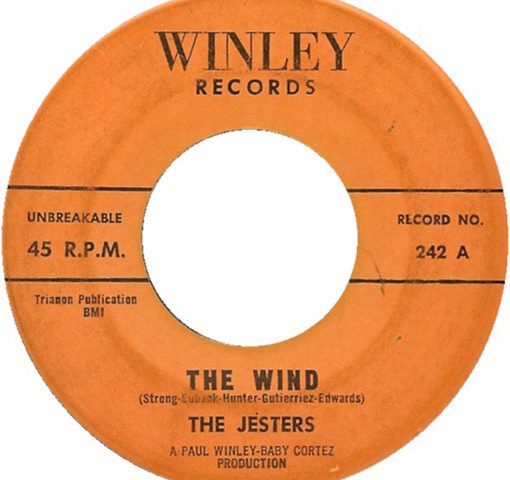 The song “The Wind” was written by two members of the group Nolan Strong and The Diablos, that is, Nolan Strong and Bob Edwards, and Devora Brown. Strong and The Diablos recorded and released it in 1954. They were an R&B and doo wop vocal ensemble that formed in Detroit. Strong is known for his high other-worldly tenor voice. On “The Wind,” his unique voice,  the instrumentation, as well as the talking bridge give the record a haunting quality.

The Jesters did a cover of the song, with the recitation in the middle and all, which charted in 1960 at #110 on the U.S. Billboard Pop Chart. It was more popular regionally on the East Coast. The Jesters were from Harlem in New York City and they originally formed when students together at Cooper Junior High School. They would sing under an elevated train station near 120th Street. They performed and won several times at an amateur night contest at the Apollo Theater, and eventually were discovered there by Paul Winley, who signed them to his independent label Winley Records.  They had some success on the East Coast with single releases  in 1957 and 1958 (e.g., “So Strange,” “Please Let Me Love You,” and “The Plea”). Along with the group The Paragons, The Jesters were alleged to have a “New York” doo wop sound, although it’s hard to define exactly what that is. Maybe it’s a certain feel. Anyway, the original group split up in 1958.  Jerry Blaine, who worked as a distributor for Paul Winley, decided to create an album on a battle of the groups, street-gang style, and created the album The Paragons Meet The Jesters, with tough-looking juvenile delinquent types on the cover. The Jesters were resurrected with original member Jimmy Smith and a few new recruits.  The group members for the recording of “The Wind” were Smith, Adam Jackson, Don Lewis, and Melvin Lewis.

Here are the lyrics to “The Wind” by The Jesters:

Darlin’, when a star falls I wish for you;
And darlin’, when I see lovers making love then I long for you …
And when the sun and the stars are shining above the mountains and the valleys,
Then darlin’ I look for you;
And even until the heavens above can no longer exist
Even til then I shall still love you.

I know she has gone but my love it lingers on
In a dream that the wind brings to me.

If you would like to read about and listen to “The Wind” by Nolan Strong and The Diablos: “The Wind.”

Please click here for the Daily Doo Wop YouTube channel, to which you can subscribe. Thank you for stopping by The Daily Doo Wop. Hope you enjoyed “The Wind” by The Jesters.