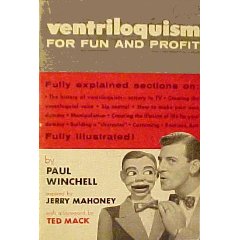 Ventriloquist, actor, and inventor Paul Winchell, who stuttered as a child, not only created and starred in his own shows, such as “The Paul Winchell Show” and “Winchell-Mahoney Time,” but he appeared in many TV shows throughout the 1950s, 60s, 70s, 80s, and 90s. These included “The Beverly Hillbillies,” “The Donna Reed Show,” “The Dick Van Dyke Show,” “The Lucy Show,” “Perry Mason,” “77 Sunset Strip,” “Wacky Races,” “The Banana Splits Adventure Hour,” “Love American Style,” and many more. Winchell was the voice of Tigger for the original Walt Disney Winnie The Pooh series. He was also the voice of “scrubbing bubbles” mascot in the Dow Bathroom Cleaner commercials. Winchell’s dummies Jerry Mahoney and Knucklehead Smiff are now in the Smithsonian Institution.

One of Winchell’s life-long interests was medicine, and he was one of the first inventors of the artificial heart. Robert Jarvik, who developed the artificial heart and put it into practice, credits Winchell’s work.  Winchell was also an inventor. One innovation was to replace a dummy’s hands with those from puppeteers who were hidden in a crate behind the dummy. He also worked on ideas for automobiles to run on battery power, a way to breed tilapia to feed more people, and disposable razors (which, unfortunately, he did not patent).

If you are interested in reading more about Winchell’s life and work, click here for a link to his autobiography Winch. He also wrote about ventriloquism in Ventriloquism for Fun and Profit.