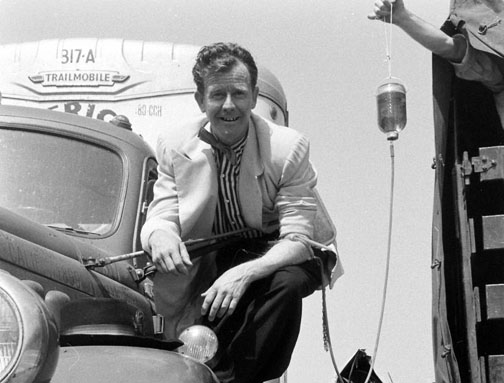 The selection for this week’s Novelty Friday is “Transfusion” by Nervous Norvus. That was the pseudonym for Jim Drake, who was indeed, a shy and nervous kind of guy. Drake wrote and recorded “Transfusion” in 1956, and that year it went to #13 on Billboard’s Pop chart. He also had a second hit that year with “Ape Call,” which rose to #28 on the chart.

Drake was born in Memphis, Tennessee,  in 1912, but his family moved to California when he was seven because of his chronic asthma. He eventually settled in Oakland, California, as an adult and spent the rest of his life there.

The lyrics speak for themselves, about this careless driver with bad judgment who keeps having accidents and needing transfusions. Drake had been working as a truck driver before and after he recorded this record. Personal injury lawyer Melvin Belli approved of the song as a cautionary tale and advice at the end of it: “So remember to slow down today!”

The record is known for its car crash sounds, which came from the Standard Sounds Effect Library. These same sounds are on other records by other artists, including “Dead Man’s Curve” by Jan and Dean as well as “Leader of the Pack” by The Shangri-Las.

In the 1950s, “Transfusion” was banned from some radio stations because of some of the more grisly lines. However, a DJ named Barry Hansen liked to play it. He eventually became known as Dr. Demento.

Drake was so shy, he refused to perform “Transfusion” on The Ed Sullivan Show. Drake did not have too much success selling his records even after this brief claim to fame. He helped others make demo records.  He died in 1968 at the age of 56 due to cirrhosis of the liver.

Here are the lyrics to “Transfusion” by Nervous Norvus: 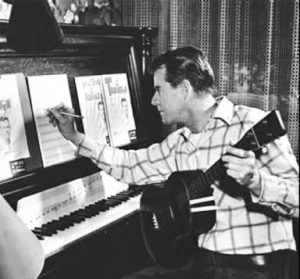 Please click here for the Daily Doo Wop YouTube channel, to which you can subscribe. Thank you for stopping by The Daily Doo Wop. Hope you enjoyed “Transfusion” by Nervous Norvus.