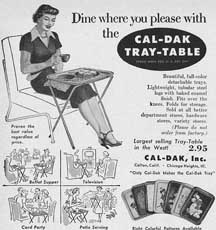 In the 1950s, Americans were on the move not only in their cars, but in their homes as well. Eating moved from traditional seating at a kitchen or dining room table to other places. There were barbecues out on the patio and stand-up cocktail parties with a buffet. Even more popular, though, was the desire to eat and watch television. The TV set, in a way, took the place of the fireplace in the living room. The entire family would watch shows together, and this meant creating an arrangement where they could eat there, too. The magic word here is portable: The family dining experience now moves from room to room. The TV tray table was (and still is) a small, lightweight folding table just the right size to hold a meal and a drink so you can eat and watch TV. The table arrived in 1952, which was a year before Swanson introduced the TV dinner (but that’s a story for another post). Cal-Dak of Illinois was the industry leader of this mobile furniture. Their advertising campaign in 1952 and 1953 claimed that these tray tables were “Perfect for TV dining.”

Ike and Mamie Eisenhower often ate their dinner from matching tray-tables in the White House, while they viewed a bank of TV consoles built into a wall. And regular Americans liked the tray-tables, too. After all, they were inexpensive and often available as premiums, such as with Niblets canned corn. Some tray tables were decorated, and others, for hobbyists, allowed you to decorate them yourself.

The early tables had a metal tray (usually an aluminum alloy) with grips mounted on the underside and tubular metal legs with rubberized tips at the bottom. The grips clipped onto the legs, which opened to support the tray. You could collapse the trays for storage, and there were models where sets of four sold with a rack for mounting on a wall.

Doo-Wopper Terry, of The Daily Doo-Wop, says that the early tray-tables rusted easily, but he came from a big TV-watching family and loved them anyway. Both new and vintage TV tray-tables can be found in stores on the Internet. If you like antiques or vintage furniture, you might be interested in China and Glass in America, 1880-1980: From Table Top to TV Tray by Charles L. Venable, Katherine C. Grier, Ellen Denker, and Stephen G. Harrison. If you’re interested in TV culture in the 1950s, try As Seen on TV by Karal Ann Marling. 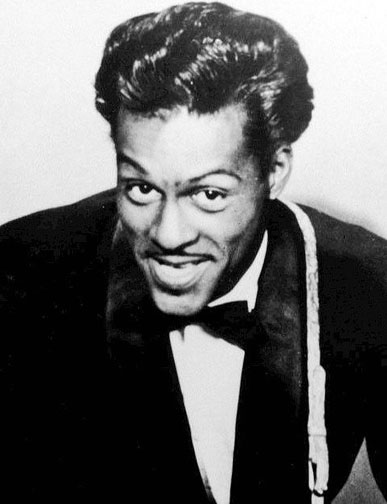