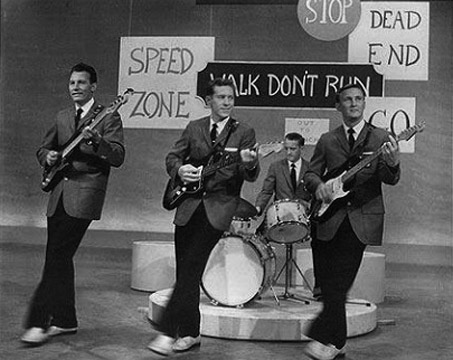 The composition “Walk Don’t Run” was one of the first tunes of “surf rock” to be at the top of the U.S. national charts and was often heard at school dances and other events. It was also one of the first pieces played by those who started up a band. The song was written by jazz guitarist Johnny Smith in 1954, and he recorded it. Chet Atkins recorded it in 1957. The recording by The Ventures was the most successful, going to #2 on the Billboard Hot 100 and #3 on the Cash Box chart in 1960.

The Ventures were an instrumental group from Tacoma, Washington, that was formed in 1958 by Don Wilson and Bob Bogle. Because of their virtuosity on their instruments, guitar effects, and unique sound, The Ventures were known as “The Band that Launched a Thousand Bands.” They influenced  many musicians, including George Harrison,  John Fogerty, Stephen Stills, Elton John, Stevie Ray Vaughan, John Entwistle, Billy Joel, Keith Moon, and more. The Ventures are also the best-selling instrumental group of all time and are considered to be a prototype of guitar-based rock groups. Group membership has changed over the years, but for the recording of “Walk Don’t Run,” the members were Wilson (rhythm guitar), Bogle (lead guitar), Nokie Edwards (bass), and Skip Moore (drums).

Please click here for the Daily Doo Wop YouTube channel, to which you can subscribe. Thank you for stopping by The Daily Doo Wop. Hope you enjoyed “Walk Don’t Run” by The Ventures.