When I Fall in Love by The Lettermen

Gary U.S. Bonds School is Out

Soldier Boy by The Shirelles

When I Fall in Love by The Lettermen 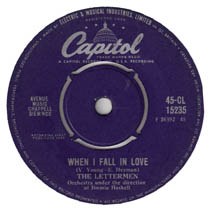 The song”When I Fall in Love” is a beautiful golden oldies from The Lettermen, who were one of the most successful vocal groups from this era. They formed in Las Vegas, Nevada, around 1959. Their music has tight harmony and lovely arrangements. They were pretty much unknown until they signed with Capitol Records in 1961. Group members were Jim Pike, Tony Butala, and Bob Engemann. Their first single  for Capitol, another one of those golden oldies even for that time, was “The Way You Look Tonight.”  The song went to #13 on the Billboard Hot 100. The follow-up single, “When I Fall in Love,” went to #7 on the Billboard hot 100 and #1 on the Billboard Easy Listening Chart in late 1962.

“When I Fall in Love” is a standard and was written by Victor Young & Edward Heyman for the 1952 film One Minute To Zero. The first hit version was by Doris Day in July 1952. There have been many covers, including versions by Nat King Cole, Johnny Mathis, Etta Jones, Johnny Crawford, The Carpenters, Little Willie Littlefield, and Kenny Rogers.

Of course, there have been many changes in the lineup of The Letterman over the years, and they still tour and perform today. The group has an astonishing record of success, with two Top 10 singles on the Billboard Hot 100, 16 Top 10 singles on the Adult Contemporary Chart, 32 consecutive Billboard Magazine chart albums, 11 gold records, and five Grammy nominations.

Here are the lyrics to “When I Fall in Love” by The Lettermen:

For another song by The Lettermen: “The Way You Look Tonight.”

If you are interested in purchasing and listening to more great golden oldies from The Lettermen, please consider this: Audiophile Gold Series

The Daily Doo-Wop Rec Room has daily featured doo wop, rock and roll, R&B, or rockabilly songs that were hits during the first era of rock and roll (that is, from about 1952 until the British invasion in 1964). After a song is featured, it then goes into the juke box. You are welcome to listen to any of the 40+ selections there. Every weekend, there is a Golden Oldies Juke Box Saturday Night, and the juke box is full of song requests from the 1950s and 1960s. Please click here for our Youtube channel, to which you can subscribe. Thank you for stopping by The Daily Doo-Wop. Hope you enjoyed “When I Fall in Love” by The Lettermen.”