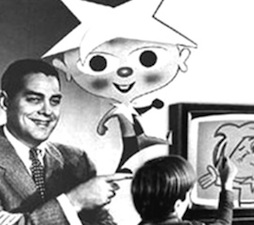 Winky Dink and You was a children’s television program that aired from 1953 to 1957. It is a classic TV show in this era when the medium was growing — as were the baby boom generation. The host Jack Barry and his sidekick Mr. Bungle hosted the cartoon, which featured Winky Dink and his dog Woofer. Winky Dink had large eyes and wore plaid pants.

That all sounds innocent enough, yes, but Winky Dink and You required the viewers (that is, the kids) to interact with the show to help solve the situations from the clues provided to Winky Dink and Woofer. For 50 cents, parents could buy their children the “magic drawing screen” and crayons kit. The screen went over the TV by static electricity. Then you could connect dots, decode messages (e.g., first the horizontal parts of letters and then the verticals), and create characters from outlines.

Kids were writing all over the TV sets, and parents felt forced into buying the special screen kit. (Doo-Wopper Terry, one of the co-authors of The Daily Doo-Wop, said this happened in his house. He and his siblings marked up the set. His parents eventually bought the magic screen but complained. A lot.)

Winky Dink was very popular but eventually was canceled not because of the magic screen, but because of news about harmful x-rays that came out of TV sets. Go figure.

Bill Gates of Microsoft fame claimed that Winky Dink and You was the first interactive TV show. That’s a pretty good endorsement for the legacy of a children’s program.