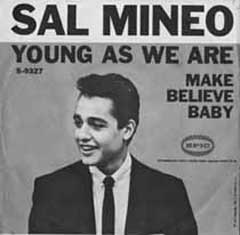 In the doo wop era, a young actor from the Bronx made it big in films (twice with James Dean) and in the theater. His murder was one of Hollywood’s scandalous deaths. Salvatore Mineo, Jr., professionally known as Sal Mineo was born in 1939. He is probably best known as “Plato” in Rebel Without A Cause, for which he was nominated as Best Supporting Actor. He was nominated again for his role as Dov Landau in Exodus. Mineo’s films, among others, included Giant, A Private’s Affair, The Gene Krupa Story, The Greatest Story Ever Told, The Longest Day, and Escape from the Planet of the Apes. Mineo enjoyed music as well and learned to play the drums for the movie The Gene Krupa Story. He eventually donated the drum set to teen idol David Cassidy.

Please click here to see Sal Mineo in a drum contest on I’ve Got a Secret, as he was on the show to promote the movie.

We’ve a star
One burning high above
Our lucky star will guide are love
Oh, young as we are

They tell us “beware
Hasty hearts when they’re young
Aren’t wise,”
But how many share love
That’s as warm and as sweet
As the love in your eyes?

There were also TV appearances on Dr. Kildare, The Patty Duke Show, Columbo, and many more. He often played a troubled, nervous youth. Although Mineo was successful in films, he especially enjoyed the stage and a live audience. He had been in The Rose Tattoo, The King and I, and Six Bridges to Cross. Shortly before he was killed, Mineo was working on the play P.S. Your Cat is Dead. Mineo’s murder in West Hollywood, CA, in 1976, was a strange one. He was 37 years old at the time. The murderer was finally caught and convicted three years after Mineo’s death. Although rumors swirled for years about the reasons (e.g., jealousy from a gay lover), it was a random botched attempted robbery by a drug addict. In speaking of himself, Mineo said, “I’ll never be mistaken for Pat Boone.” It’s doubtful he ever was.